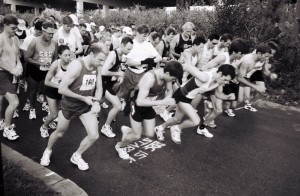 It was just shortly after Christmas in 1981 when the four founding fathers, Dave Pie, Jack Holloway, Jon and Dave DeVoll were together for dinner. After dinner, their wives called them into the living room as they had a present for each of them. The guys were each given a small package and were told to open the packages at the same time. Inside was a small patch that had a figure of a runner and the words “Pike Creek Valley Running Club.” Initially done as a joke as the wives had always heard the fellows talk about starting a club, Dave Pie challenged the group and said, “Fellows, we’ve got to do it.”
They later met and drew up the by-laws. 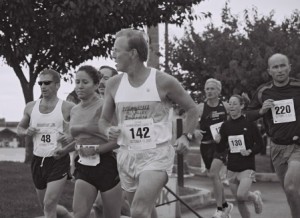 The first general meeting of the Pike Creek Valley Running Club was January 19, 1982 when Dave Pie, Jack Holloway, and Jon and Dave DeVoll developed the goals and rules, elected officers and established a philosophy for the club. Dave Pie had wanted to put together a club to educate runners to help those runners avoid some of the mistakes he made. The club held meetings in which topics such as running techniques, training, equipment and new technology were discussed. The initial meetings were held at Goldey -Beacom College but as the numbers in attendance continued to grow, the meetings were moved to the Delcastle Inn and held for many years on the second Tuesday of each month.

The meetings began to offer much more than education, however, as a companionship and camaraderie developed among group members in terms of support, encouragement and friendship. The primary focus of the Club was on the everyday runner and to keep it fun as well as helping each other. 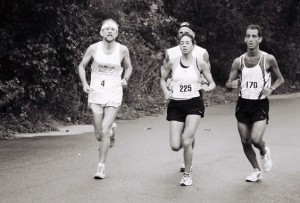 The Club made its first public appearance at the Spring Thaw in 1982, complete with a t-shirt with the newly-designed logo. Eight t-shirts were made and membership applications were passed out. It was at that time that many other runners because inquiring about the club. In time, a monthly newsletter, The Pacer, was sent to each member which included information about the sport, race results, upcoming events and the heralded runner of the month. The first awards banquet was held in 1983 and that was also the first year of the Pike Creek Classic 15K, held in May.

The awards banquet celebrated its 25th anniversary in March 2007 and the 25th Delaware Distance Classic (formerly the Pike Creek Classic) was held on October 7 at the Wilmington Riverfront. The Pike Creek Valley Running Club has its own Hall of Fame which honors members for their service and longevity with the club, and now boasts 40 inductees. The Club continues to give year-end awards at the annual banquet to honor runners for their performance over the year as the tradition to support runners continues. The Club also has a Boston Send-Off every April for the Boston Marathoners, a picnic in July and a Christmas/ Holiday Season Party in December.
Submitted by Rudy Antonini, Club Historian