Ron is the only inductee into the Pike Creek Valley Hall of Fame for 2002. He joins an elite group of current and former club members who have achieved the pinnacle award within our club.

He began running in 1984 after high school and joined the club in 1988. Despite his obligations as “Mr. Mom” he has remained active over all these years by participating in club functions even when he was plagued by injury which curtailed his running activities.

He has assisted the Race Director of the Classic for over six years with details and making the race a success each year.! He is also an active Board Member.

Here are some of his running accomplishments that many people do not realize:

He has completed 25 marathons including 10 Boston Marathons.

His personal best Marathon time is a 2:54 at Boston.

He has run 17 Caesar Rodney Half marathons.

He completed the Philadelphia Marathon in 2002 by running a 3:13 which qualified him again for Boston.

Ron and Dave Farren are training buddies, which some even say they are glued at the hip. Ron and his wife Mary-Jo live in North Wilmington and are the proud parents of two children. Congratulations Ron for your dedicated service to the club for over 15 years and were glad you are back at the races.

Ron and Dave Farren are training buddies, which some even say they are glued at the hip. 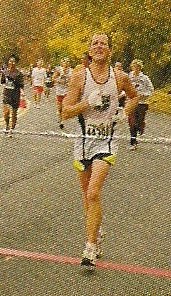