John Schultz has been running for over 20 years. His first run was a personal one–to find out if he could run the 4 miles from his office at the Du Pont building to his home in Bellefonte. John was wearing his suit, street shoes and all. He has since made up for that faux pas by becoming known to most of us as the runner wearing red shorts and being topless for about 11 months a year. Hence he earned the nickname “Bare-chested John”. But John says he doesn’t do that much anymore.

John has competed in over 1500 road and off-road races, including 50 marathons, three ultra-marathons, 27 duathons, and 13 multi-stair climbs. He also does the Brandywine End to End Hike most years and since most other participants are hiking the 37 miles while John is throwing in running, he’s usually the first to finish.

Recently a 75 – 79 age group was added in the Races2Run.Com website to the state records. This addition identified John as the Delaware state record holder for all eight race distances in that new age group. The eight distances, time results, and the years they were established are listed below:

John took a day off from running on February 5 when he was seen “race-walking” from the beach to his car in Rehoboth after the Polar Bear plunge. As usual, John was wearing his running outfit minus his shoes in 42 degrees and a 30 mile wind. The other 3500 plungers were wearing sweat pants, shirts, blankets, and sneakers,etc. John was very recognizable. We will now call him ” EVER READY ” Schultz. 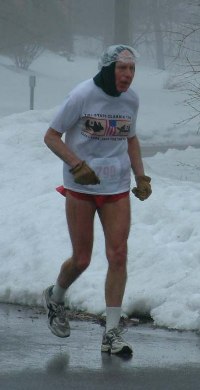