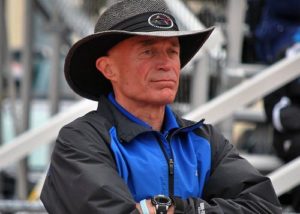 Jim Fischer is being recognized by Pike Creek Valley running Club not only for his involvement in the local running community but because of his many accomplishments as coach at the university of Delaware.

For those of you who have not had the privilege to know Jim, he is one of the nicest people you would ever want to meet. He always has time for others and is glad to share his expertise and running knowledge. For the convenience of local runners, Jim provides a weekly track session at the University of Delaware on Tuesday nights.

In addition to providing the weekly track sessions at the University of Delaware, Jim has served on the Pike Creek Board as Running and Race Advisor, been guest speaker at our monthly meetings, and volunteered at local races as well as volunteering through his team. He also accompanied Noel Relyea to the Lake Tahoe area of California in 1991 to be her “pacer” in the Western States 00 mile run.

Jim has also coached nationally ranked distance runner, Steve Plensica as a high school talent. He also coached All American high jumper Candy Cashell in her post-collegiate career as a finalist in the US Olympic Track and Filed Trails. He supervises Track and Field clinics at the University of Delaware and Bucknell University, as well as at local high school clinics. Jim also participated as an Assistant Coach for the East Team for the Olympic Festival Track and Field events in 1991.

Other professional organizations with which Jim,is affiliated include serving as Vice President of NCAA Cross Country Coach’s Assocation. Treasurer of the Delaware Association of Health, Physical Education and Dance Professionals. He also participates in the USA Track and Field on both local and national levels.

Some of Jim’s personal running accomplishments in clued a marathon PR of 2:43:23 set at Boston in 1979 and a 1:13:57 PR set at the Philadelphia Distance run. In addition. Jim had the distinguished honor of winning the Masters Division in the 1989 Caesar Rodney Half Marathon with a time of 1:17:13.

Congratulations Jim for your many years of dedication and hard work and best wishes for continued success. 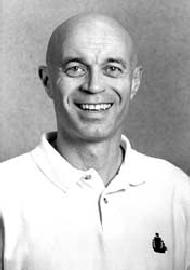