Dave joined PCVRC in 1996. Although not an extremely long tenure for a Hall of Fame nomination, Dave as spent nearly the entire ten years as a board member. Dave’s efforts are priceless as he has been the editor of the Pacer in years past, has started fun runs on a weekly basis, started a yearly tradition on the Thursday before Labor Day weekend with McCorq’s Fun Run from his house, and was Vice President for a short time. He has also volunteered at races and attended nearly every function PCVRC has put together over the past fifteen years.

Currently Dave edits the E-Bulletins that most of you receive throughout the year and puts in a lot of time on the board attending meetings, helping make decisions for the club, and generally is one of a select group of members who have been instrumental in keeping the club going the past few years.

As for his running accomplishments, Dave started running at the age of 48. Running in a pair of cross training shoes, he ran minimal mileage for the first couple of years. Approaching fifty, Dave started training for real by running a three mile loop around Delcastle in which he raced against himself every time out. He was training for a five miler that was held at Delcastle that year and was only a mile from his house. So he was going to give it a try. In his first race he placed third in his age group and was now hooked for life!

Dave has since run 81 Marathons, includeing an ultra and two Stumpy’s Marathons. What is a Stumpy’s Marathon anyway? Like other serious runners, Dave loves the challenge of qualifying for and running the Boston Marathon which he has done twelve times and hopefully more in the future.

Updated March 2019
As of this time, Dave has run 153 marathons, including one in all 50 states. He has completed the Boston Marathon 14 times. He has run the Delaware Marathon all 15 times since its inception in Wilmington and plans to continue doing it as long as possible. He has a blog http://mccorq.blogspot.com to be more about some of his running stories over the years. 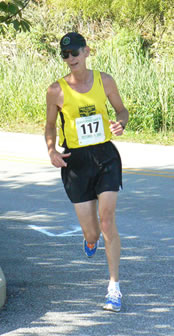