The following club members were recognized for their achievements on 3/10/22:

Few runners can claim the consistent results Abby has produced over a variety of distances and terrain. Abby excelled at every event she participated in during 2021. She was the overall champion for the Mid Atlantic USATF Grand Prix with an average age graded score of 87.9 (an age grade of 90 is considered world class)! Abby is also fast when you take her off the roads: she placed as second master at the USATF Mountain Running championships in Oregon in August and was fourth in her age group at the USATF National Cross County Championships in Florida in December.

In between running national championship races, Abby participated in numerous local races. When Abby enters a race, you can count on her setting a state age group record in the process. Her new state records include:

Her 8k time from the Scott Coffee run in Moorestown was also significantly faster than the state record for 5 miles, but no official 8k state records are kept.

Abby ran track in high school, but says she “got lapped in the mile”. She really got started as a runner while in graduate school in Philadelphia. The highlights of her career would be running her personal record of 2:41:25 at the 2008 Olympic Marathon Trials, placing 29th; and meeting her husband, Matthew Cutrona, after the Broad Street Run in 2017. Over the course of her career, Abby has had to overcome many major injuries requiring 6 orthopedic/sports surgeries and some unfortunate freak injuries, as well.

Allison Emmons – 2021 Runner of the Year

Allison has a successful year in the master’s division, winning the women’s title at the Philadelpia Distance Run, Broad Street Run, Cooper Norcross Bridge Run, and Rothman 8k. She set state records of 1:21:32 (half marathon) at PDR, 59:37(10 miles) at Broad Street, and 37:58 (10K) at the Bridge Run. Her 8k time at Rothman was significantly faster than the existing state record for 5 miles, but no official state records are kept for the 8k distance. She attributes her success to the support she received through PCVRC and the running community, who she felt cheering her on in races, on the sidelines, and through social media.

Allison’s running career began in her freshman year at A.I. DuPont High School, where she achieved All-State honors. After becoming a mother, she decided to pick up running again and started a running club in her then hometown of Las Cruces, NM. Running the desert mountains and roads was greatly spiritual and inspiring, and helping others find their passion for running became her devotion. “That is when I really became the runner I am today. I learned how to find joy in every step I took, and every race I ran I became better and stronger. It was a deep transformation.”

Upon moving back to Delaware, Allison found out about PCVRC. She had to overcome a chronic injury and surgery which required her to take some time off. Although her surgeon doubted a strong return to running, she came back stronger, faster, healthier, and ready to compete in the 40+ age group. “Running allows me to have a deep connection with nature and with myself. It forces you to be in the present moment. When you are running you are connecting with the earth and your body and breath, you can’t ignore pain or bad weather or being alone in your head. It has always been a very pure experience to me and I am beyond delighted to celebrate by successes with the friends I have met here at PCVRC.” 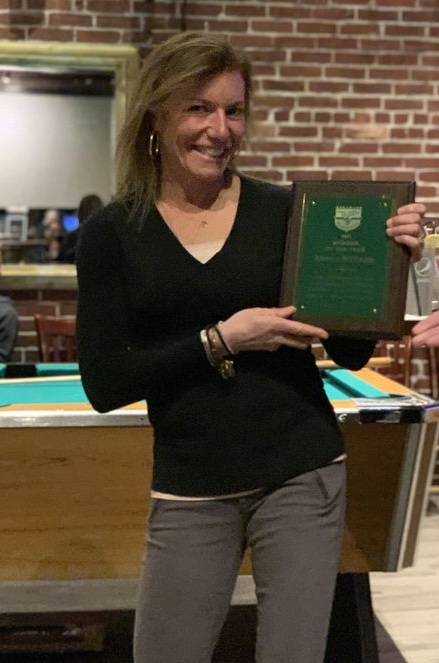 Alison McCann has played a lead role in organizing most our club’s events for the past couple years. As PCVRC Secretary, she helps run board meetings and takes the minutes, but has been going out of her way to make our club a more valuable resource to members and the community. In particular, she volunteered to be race director for DDC15K in the constantly changing Covid environment and was largely responsible for it going smoothly. Besides that event funding the club, we were able to donate $1200 to Nemours Children’s Health.
Alison helped coordinate the purchase and distribution of discount park passes. (Not as easy as you might think)

She assisted new runners at our Couch 2 5K program and we all enjoyed the year just a little more thanks to her coordinating our Spring Social at Dew Point Brewing Co. and helping out at the Summer Picnic at Bellevue Park, Fall Boston Sendoff and our Holiday Party. She was a leader in each case to make it happen.

Besides helping other runners through club events, Alison ran lots of races. Her personal accomplishments in 2021 included:

The Board and all of us here appreciate the role Alison has played in making the club more fun, so we’re proud to honor her as our Member of the Year!

Lynn Knothe – 2021 Volunteer of the Year

Lynn began running in 1991 and really “got the bug” when her Brandywine XC team won the state championship in 1994. She met her life partner Greg through running. Lynn won the DE marathon in 2005.

Lynn has been volunteering with running for many years and also for PCVRC. In particular, Lynn has helped out and also taken pictures at many of our events. For the Lehigh championships, she helped with the singlets and all of the racing packets for people. Lynn has also been a volunteer for the DDC many times over.

For the USATF races, in 2021, Lynn stepped up to make sure that we have racing teams ready to run for all of the USATF races, both road races and off-road. This is a tough job because we need to have teams of at least 5 for every race for our score to count and one of those people must be a female. Lynn does a great job at recruiting, cajoling and otherwise “incentivizing” our USATF members to run – and we win money!

There is also the “Boston Bus.” With the passing of Lee Kauffman, Lynn and Pat Patnaude stepped up to keep this annual pilgrimage going for the next generation of Boston runners.

So, thanks Lynn and congratulations on your “Volunteer of the Year” award.

Adam Shilling – 2021 Volunteer of the Year

Long-time board member and club VP, Adam Shilling ran a BQ at the Coastal marathon in 2021, so he hoping to add another Boston to make it 25 marathons run. His favorite running activity has been pacing a marathon runner as his first marathon after a broken hip, but he also said he loves Rehoboth, both the run and the party. He’s also a triathlete but says running is still what he enjoys most because it “the most pure.”

As a volunteer, Adam generates that awesome newsletter which we all appreciate when it shows up in the inbox (especially the new people). So important to showcasing the PCVRC community and letting people know what’s going on. Adam also does a terrific job of managing the volunteers (can I say, herding the cats) at our annual DDC race. Making sure that everyone is where they need to be and that all of the many tasks that are needed get done. We could not have a successful race without this army – and thanks Adam for your fine work, you deserve this “Volunteer of the Year” award.

The following members are recognized for noteworthy accomplishments: 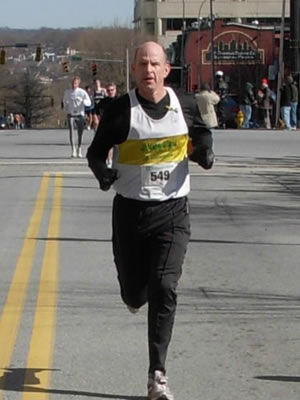 This year we lost another prolific runner from the Pike Creek family – Lee Kauffman. Lee was 63 and died unexpectedly on April 25 of last year. Lee ran 34 consecutive Boston Marathons and is in the PCVRC Hall of Fame. Lee was known for his running and his coaching and he coached runners for several years at Padua Academy.

Lee was always very helpful to Pike Creek and other runners with his knowledge of courses, techniques and conditioning. With the passing of Doug White in 2016 and together with his partner Pat Patnaude, Lee successfully ferried runners to Boston for five years. We’ll miss Lee’s involvement with our Pike Creek running family. Here’s to Lee Kauffman, may he run in peace!