The club finished in 1st place in the club challenge competition for the 1st time in club history! The club has participated in the road series since its inception in 2002. We fielded full teams (at least 4 men and 1 woman) in all 11 races this past season.

At the final race weekend – the Rothman 8k, Philly Half and Full Marathon we had 24 PCVRC members compete in 1 or more races. Our own Betty Olmsted braved the crisp, breezy conditions in Saturday for the Rothman 8k and returned on Sunday to finish the half marathon.

Highlights from the weekend include 3 complete team scores. These scores are comprised of the top 12 men and top 3 women from all 3 races.

The second team score men’s AG ranged from 85% to 82%, and our scoring lady was Carol Giampietro with 80%.

Age grade Competition:
The road series also recognizes the top 10 individuals who have the achieved the highest age grade average by completing a minimum of 6 races during the season. 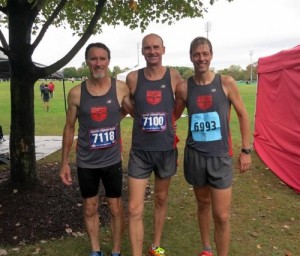 The off-road races provide a unique set of challenges compared to the road race events. Races are conducted on variety of terrains and conditions. Trail race courses are routed over single and double track trails with occasional obstacles to be cleared along the way. Hills, rocks, roots, mud, and the occasional stream crossing are common occurrences in many of these races. These challenges may sound like unnecessary risks but they provide competitors the opportunity to test their physical and mental strengths under a variety of conditions. The trail series is also noted for its infamous post-race tail gate events and comradery among fellow competitors.

Highlights for 2014 include another stellar season in which our ladies led the way. PCVRC has a great group of ladies who have committed to running the trail races and often outnumber the men at many of the off road races. The season began in February in Reading PA with the Ugly Mudder 7 mile trail run. While there was no mud this time we did have the pleasure of running thru 2 feet of fresh snow while climbing and sliding around the hills of Mt. Penn. The season concluded in November with the 30th annual Delaware Open Cross Country 5k at Brandywine Creek State park. Ironically we had the pleasure of crunching thru a thin coating of snow and ice in the first mile of the DE XC race too.

Age Group Competition
The off road series also recognizes individual performances in 10 year age groups. The top 3 age grades scorers are scored 5 points for first, 3 for second and 1for 3rd and are tracked throughout the course of the season.

This event marked the first time the club had participated in a major USATF event on such a grand scale. We have a few members who had previously participated as individuals in USATF championships but for most of them this was a new experience in many ways.

Many of the 64 club members had never run cross country in high school or college. We did have a few ringers who were prior all state runners as well as several with collegiate experience at the division 1, 2 and 3 levels.

We traveled via charter bus from the Wilmington riverfront to Lehigh which made the day seem more like a collegiate team road trip. Our home for the day would be a heated tent provided by the MidAtlantic USATF which proved both large and warm enough for folks to stretch, relax and even catch a nap.

The dusting of snow the Saucon Valley area received early that week had melted leaving a few soft spots but otherwise the grass course was in fine shape. The only exception to that was ~ 200m section around the 1k mark where the course passes by the construction site for a new softball field. No grass there and a nice slick coating of mud but thankfully this area did not have significant impact on any of the races. Women competed on the traditional Paul Short 6k course, and the men followed a modified version of this same course for their 10k course.

PCVRC sent 64 runners to the line that cool December morning. Members ranged in age from 21 to 82 competing as teams in the 4 races. PCVRC had teams in both the men’s (2 teams) and women’s open races. In the masters races we fielded teams in 10 year age groups from 40 thru 70 in the men’s race and 40 thru 60 in the women’s race. Standard cross county scoring applied – order of finish for the top 5 or in some of the master’s age groups (men’s 70 and all women’s masters) top 3 finishers creating a team score.

Closing thoughts: What other sport can anyone who pays the entry fee get on the same field as world class athletes and compete regardless of age or ability! USATF Club Cross Country National Championship A special thank you to the Pike Creek Valley RC board for their support that contributed to making this day such a success. Congratulations to everyone who joined us and thank you for participating. Wishing everyone a healthy 2015 and I hope to see many more of you out at some of next year’s Mid Atlantic USATF road or trail races!