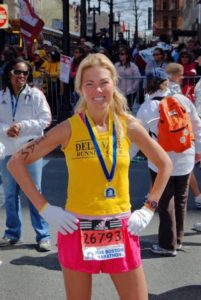 Inducted March 2018
Theresa has been running and running well for over 30 years in the Wilmington area. She was raised in Wilmington but never ran while in High School at St. Mark’s. As she likes to say, she was a late bloomer to athletics and running in particular. She became a member of PCVRC in her twenties after college while working as a Pharmaceutical Rep.

As mentioned Theresa did not run in High School but began running as a senior with her Dad at Delcastle. While at the University of Maryland, she placed in a 10k and the Coach of the Cross -Country team asked her to join the team. Coach Torpey developed her natural ability to run distance and included her on the team for the next three years. Being on the team and having support through training and racing meant just as much to her as improving her times. She values all of her running friendships developed over the years Her running clubs in NY, NC and Florida were her teams after College and she credits those friendships with helping her to continue to develop her running talents. Nothing like friends to do those long runs with and support your goals! 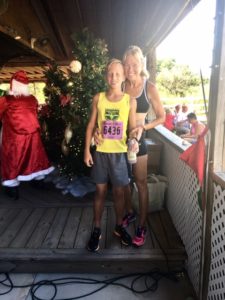 She settled back to Wilmington in 2000 and reached running goals in her 40’s she never imagined. She joined PCVRC again and has been active participant for the Club not only racing for the USATF team both on the road and off for many years but also as a Board Member. She has won several PCVRC awards including Runner of the Year in 2008 and Outstanding Running Achievement Awards for 2001, 2002, 2005, and 2010. These awards are a testament to her dedication to the sport of running and commitment to the Club.

She has run over 30 Marathons including Philadelphia , Marine Corp, Colorado, and Steamtown, but she is most known for finishing 13 Boston’s (qualified 18x) from her 20’s to 50’s in an average time of 3:30…her first 3 Boston’s were gun–timed as chip technology was not developed so could be faster. She raced over 30 races in a year for many years in her 40s, winning OA in many 5k’s and various distance races and placing in most races in AG. She had a talent of running 5k’s to the marathon distance well compared to many runners. It was not until her 50’s that foot surgeries and injuries slowed her down.

Some of her notable accomplishments include:

Her greatest joy and motivator to stay healthy was having her son Liam at age 40. He is a rising star on Salesianum’s Cross Country program. Theresa has enjoyed Coaching his Cross Country teams and sharing running adventures across the Country with her husband , Shawn. She also participates in Triathlons and Duathlons as well as taking and teaching classes at HAC for her Cross training benefits, especially getting older. 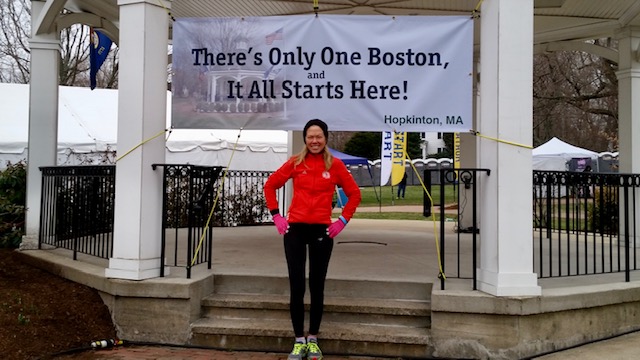 One of her fundamental motivations throughout her long career is to be a role model to women of all ages. Through her active participations in the New Balance Team events, Girls on the Run, and volunteering for the PCVCR Couch to 5k she has and continues to show that women can have a family and continue to enjoy running and racing.